JEAN BEDEZ
Born in 1976 in Colmar, France
Lives and works in Paris and Marseille

A 2001 graduate of the Beaux-Arts de Paris, Jean Bedez was awarded the Lucien Quintard prize for painting, in 1999, from the Stanislas Academy in Nancy for a conceptual graphic work in which he examines the notion of a signature gesture and our relationship to Time, which he will continue calling into question throughout his work.
He has exhibited at the CRAC Languedoc Roussillon (Sète), the Musée des Arts Décoratifs (Paris), the Museo Villa dei Cedri (Bellinzone, Switzerland), and the Palais de Tokyo (Paris). 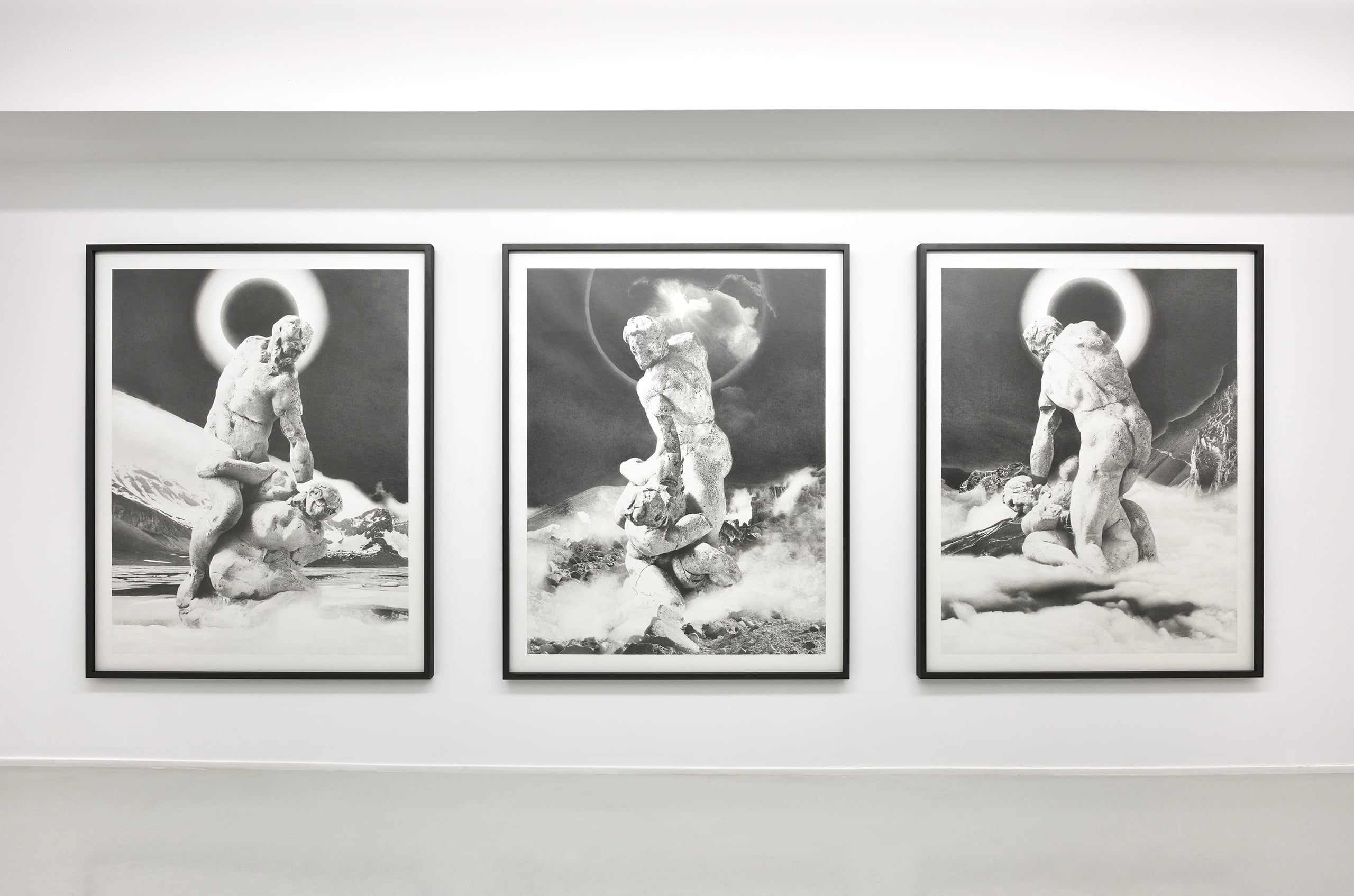 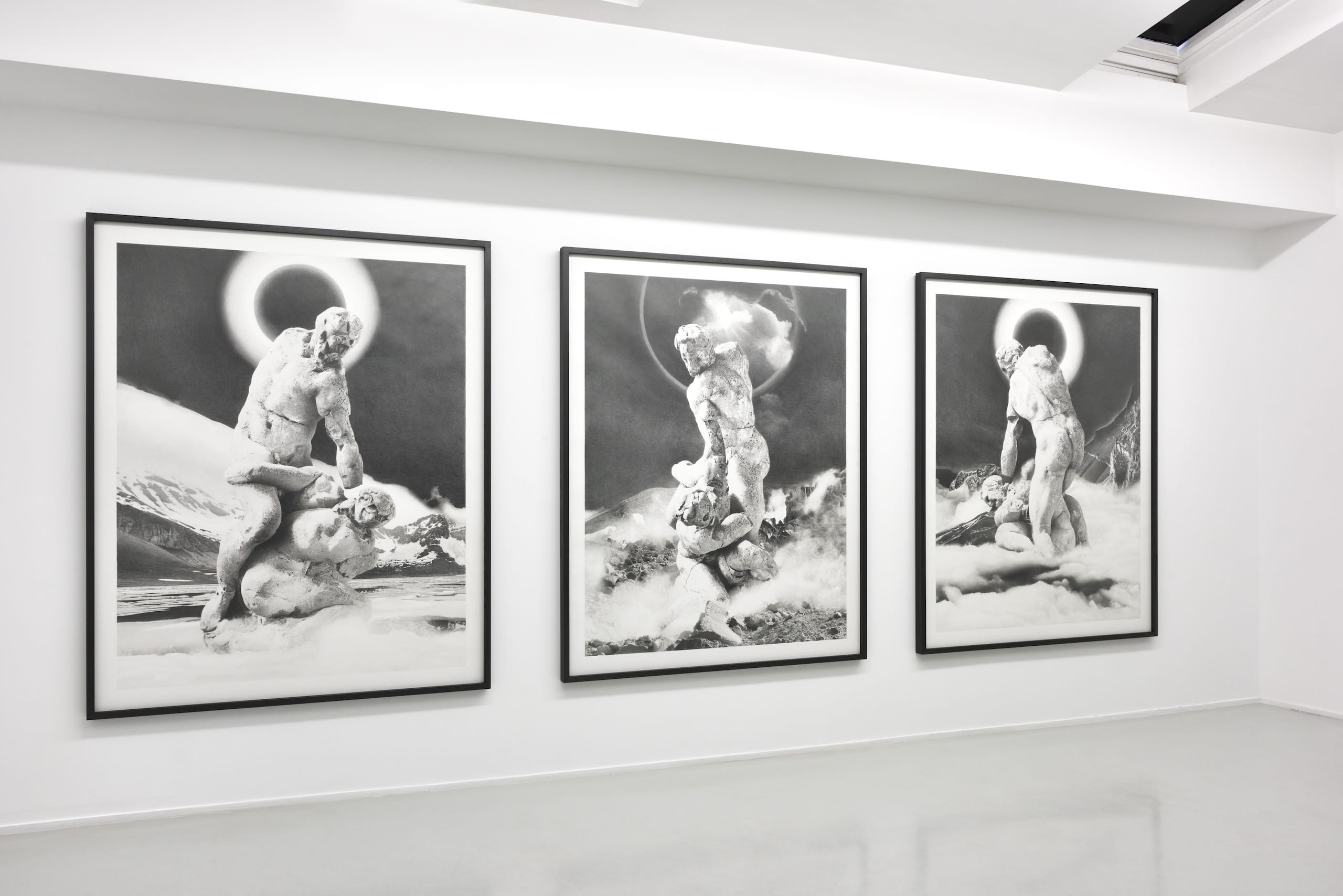 The triptych presents from three different angles (front, profile, and back) the mythological fight between Hercules and the giant Cacus, son of Vulcan, who had dared to steal from Hercules. Bedez again explores the universe of myths (as in the 2018 series Pluto, Mars, Mercury, Jupiter) and deepens his reflection on the art of combat inaugurated in 2014.
In this recreated, reinvented gigantomachy based on a statue by Michelangelo, Bedez continues a fertile dialogue with the Old Masters by drawing inspiration from a subject treated by Latin poetry, Florentine sculpture of the Renaissance, and the eighteenth-century drawing.
The monumental stature of the mythological hero, a colossus, his muscles straining with the struggle, dominates the monster, struck down at his feet. An opaque night, obtained by very dense blacks, envelops a rocky chaos, contrasting with the paleness of diffuse mists. Looking around, three visions of the same landscape appear, from which emerge three of the four elements: the frozen water of a lake, the telluric element of the mountains, and the aerial lightness of clouds of fog. A black star, eclipsed by a halo of light, overhangs the hero’s head like a halo.
The fight has a cosmological dimension. This solar Hercules crushes a monstrous figure that mythology associates with the darkness of caves and the blackness of smoke. In a landscape evoking the origins of creation, light metaphorically emerges from the darkness, the stars and the elements participating in the triumph of the demigod by intensifying the drama of the scene. 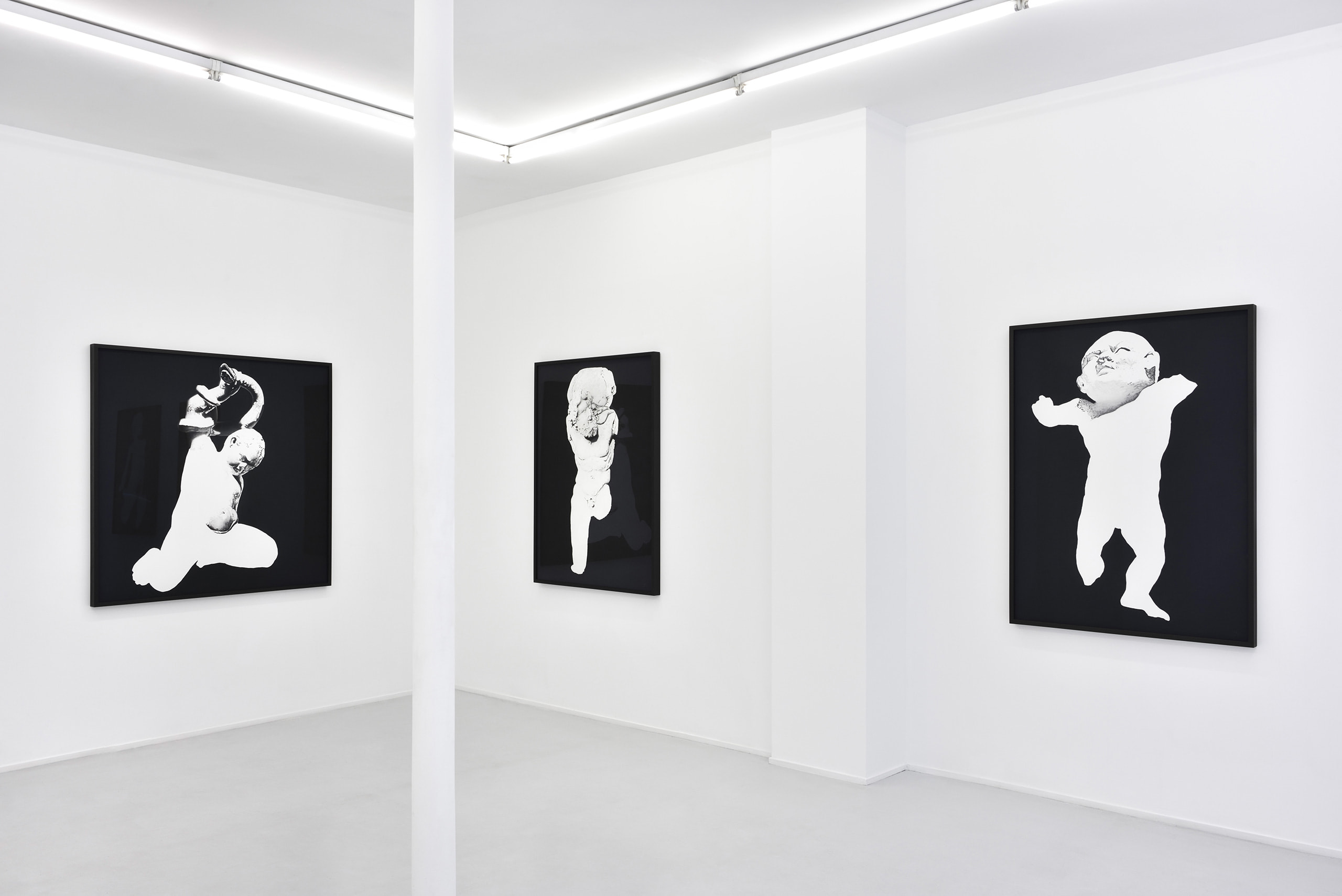 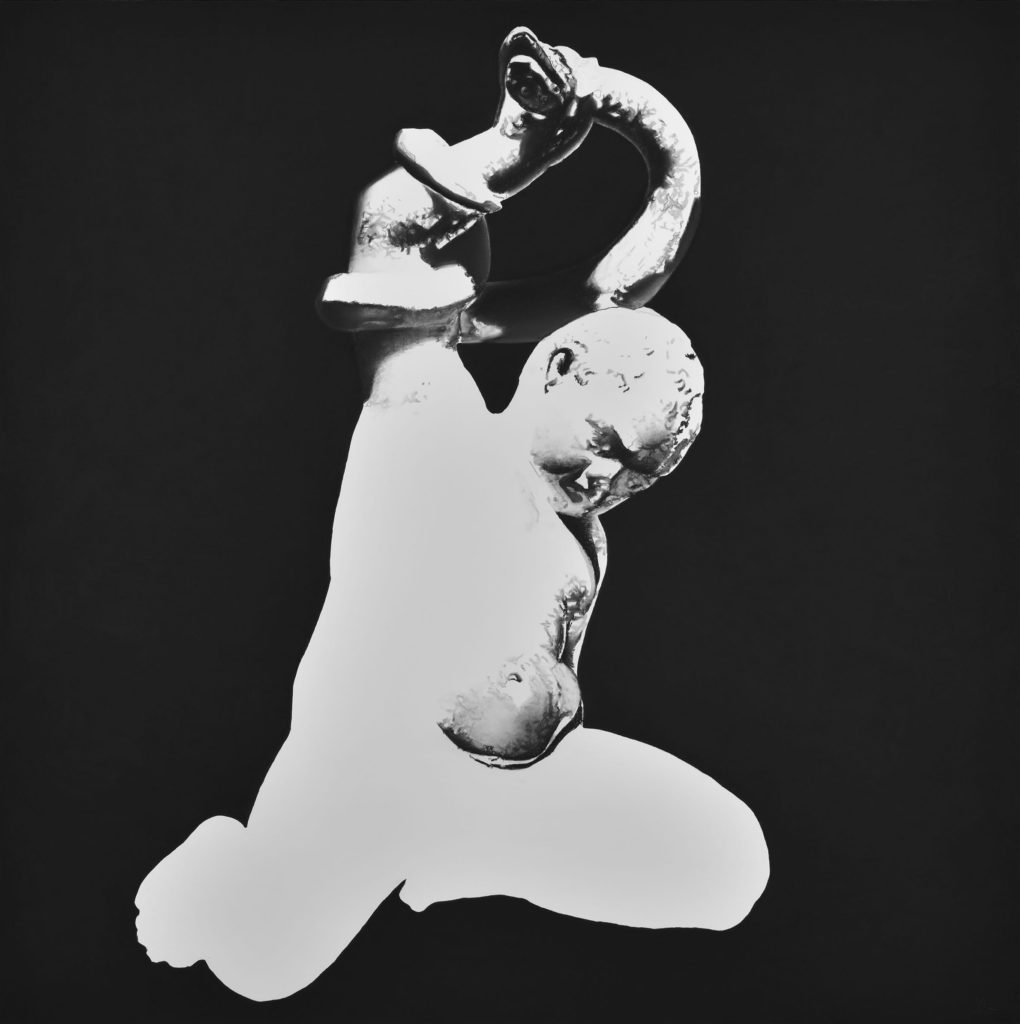 In this drawing, executed after a Roman statue from the second century BC, Hercules as a child, immortalized in the posture of a wrestler, pulls himself up from the ground in a diagonal effort as he pushes back the snake sent by Juno, its fierce mouth open. 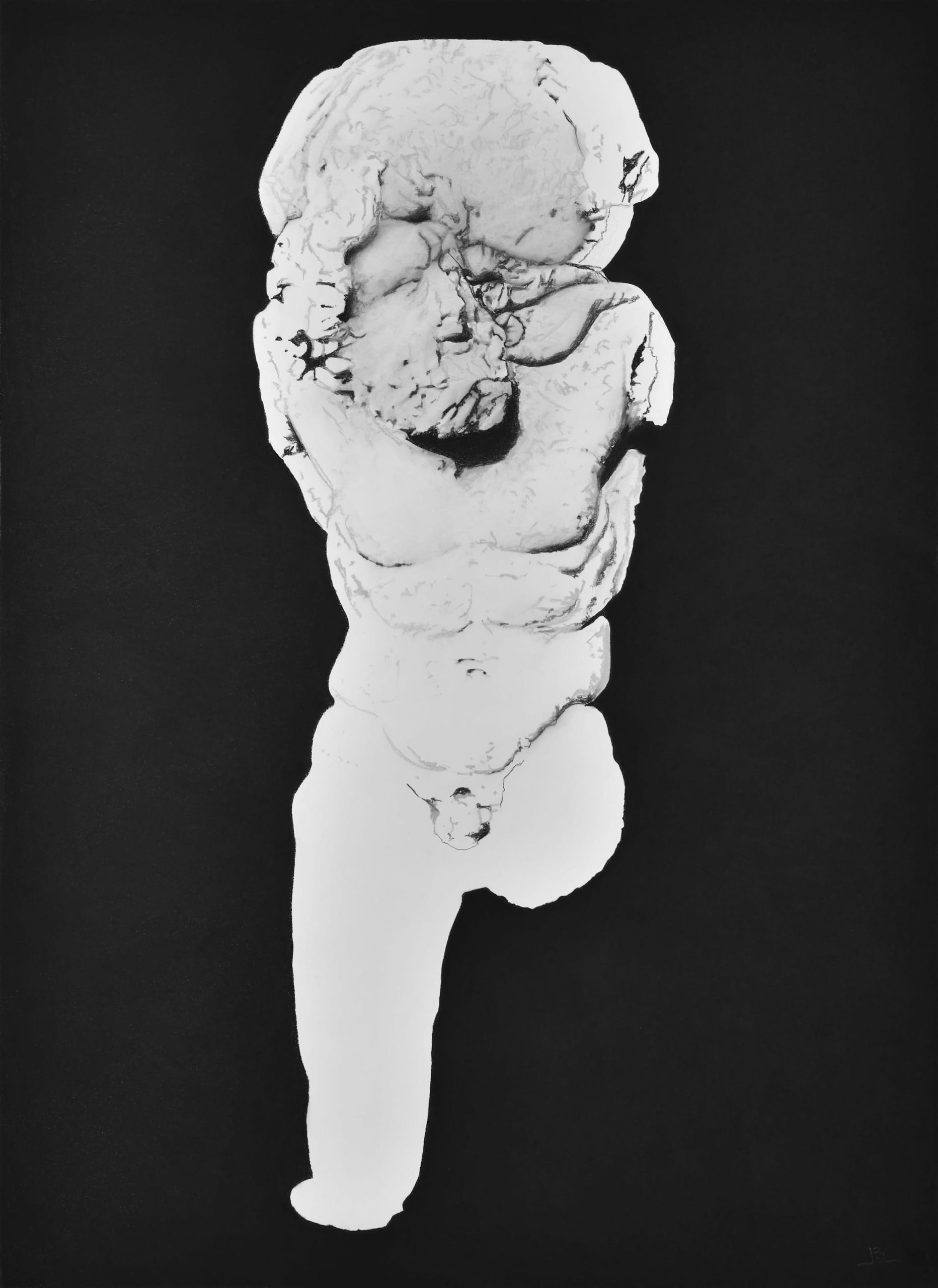 An artist from Rhodes, in the first century BC, imagined the giant Atlas, his body arched and straining, summons all his strength to continue, through the centuries, carrying the globe on his shoulders. 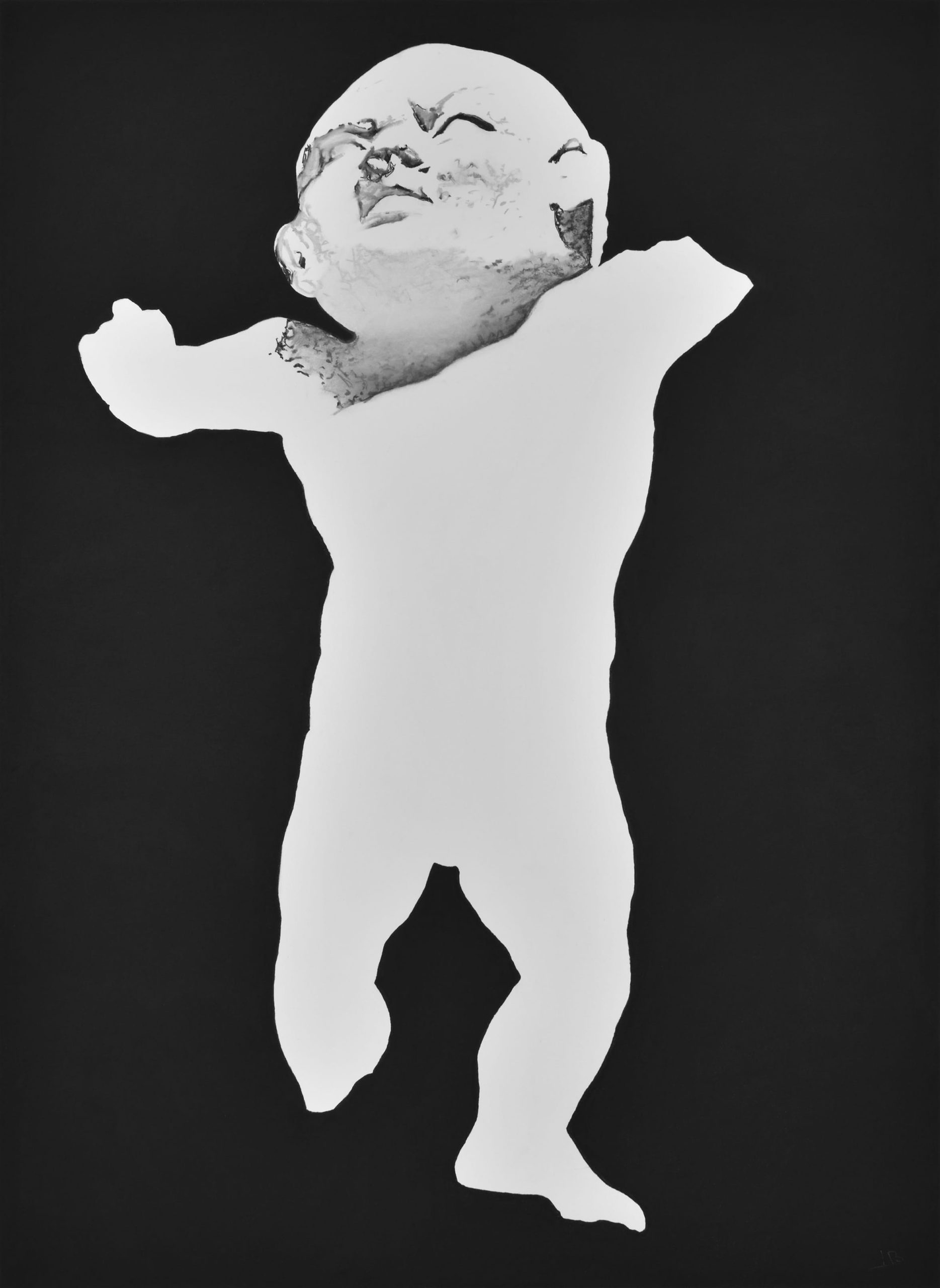 Inspired by a terracotta made in Alexandria in the fourth century BC, this disturbing giant, with his face raised to the sky, defies the laws of gravity, in a simulated flight. 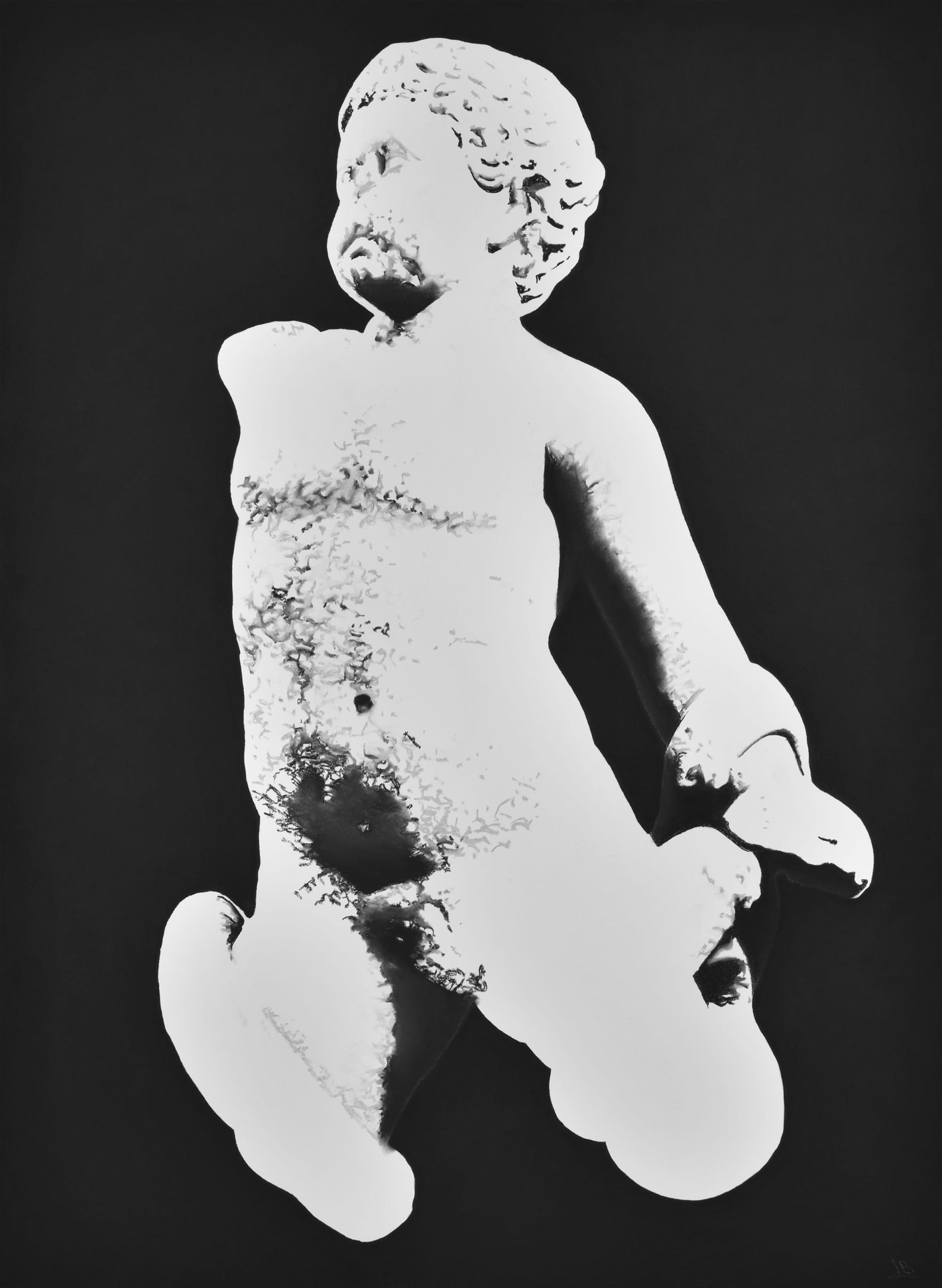 Hellenistic art of the first or second century illustrated, in its turn, the canonical feat of Hercules as a child by representing him as an athletic cherub fighting the snake. 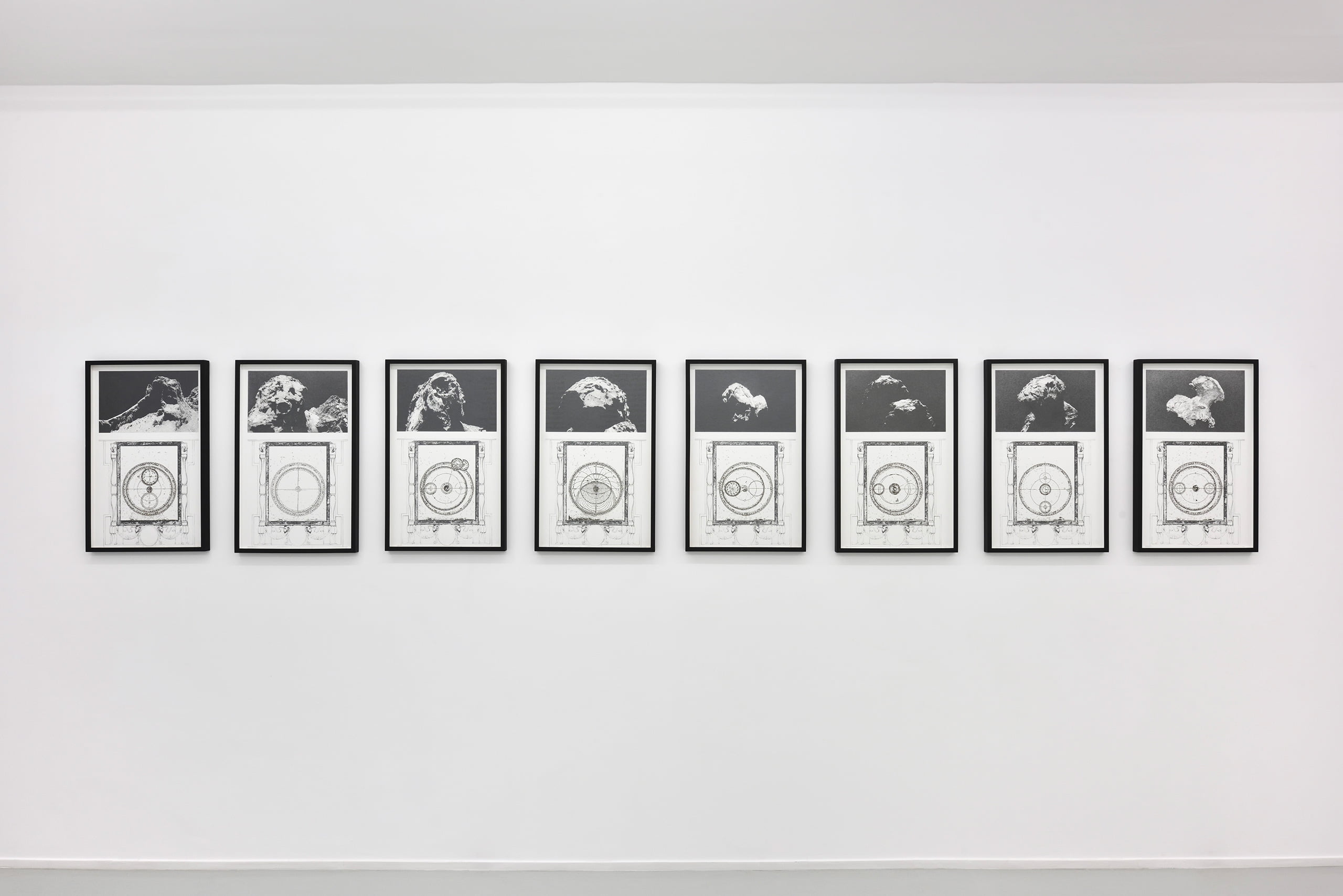 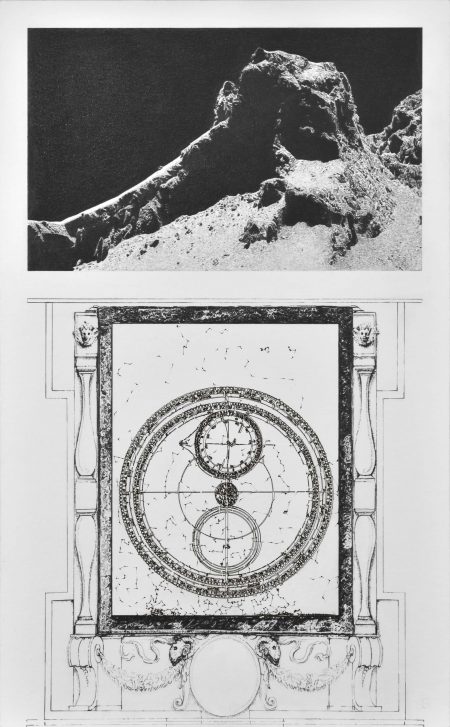 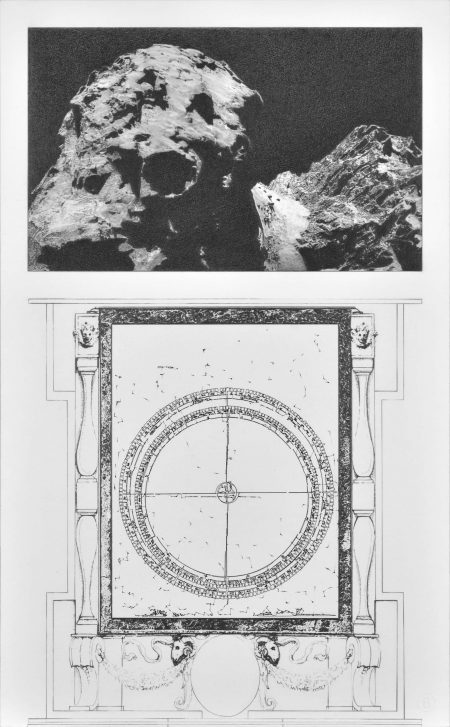 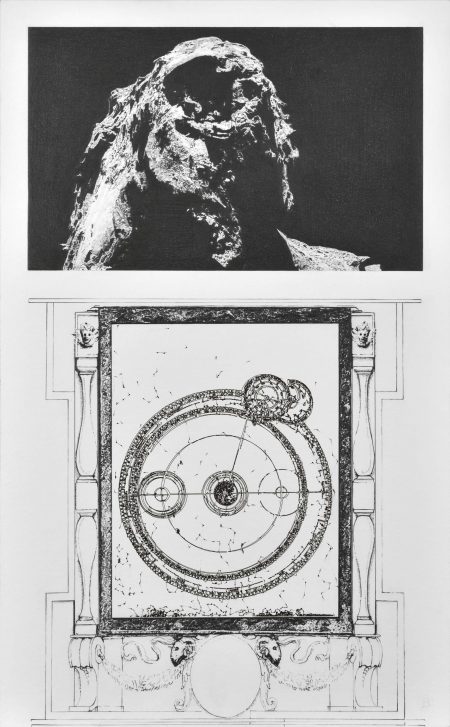 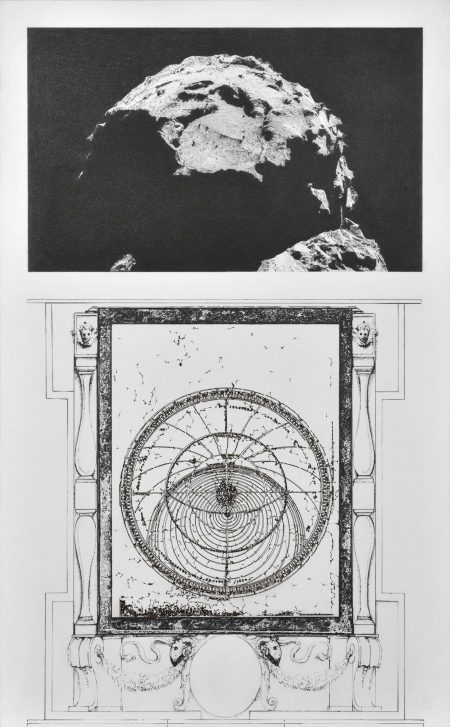 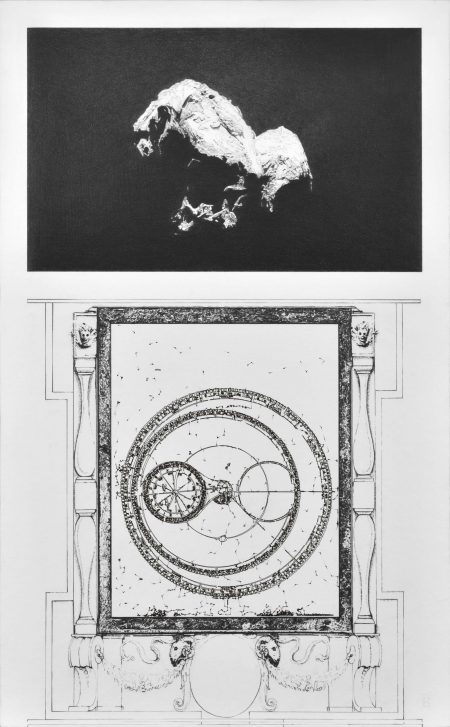 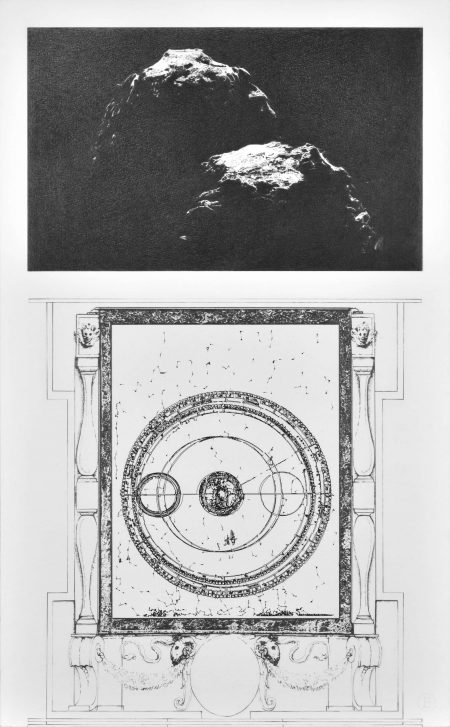 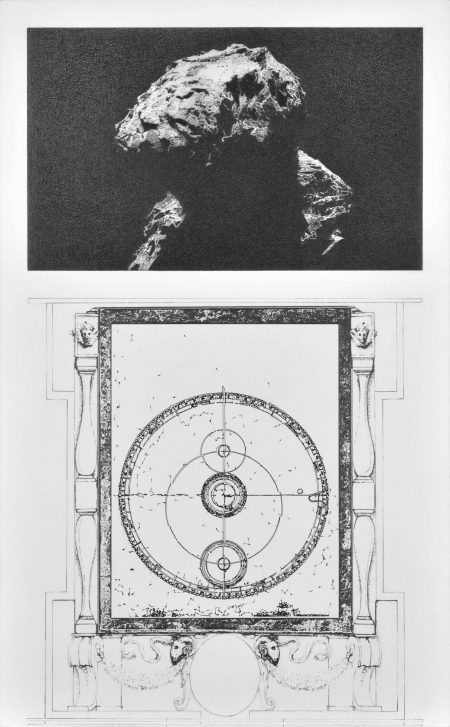 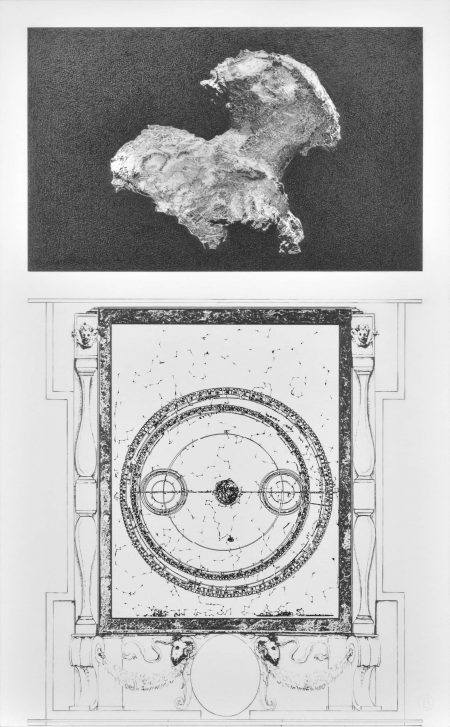 De Sphaera Mundi dives into the cosmological dream that haunts several of Bedez’s works—such as Paranatellon, Magni Sidera Mundi, and Ignis Opus—presented in his previous exhibition Le Ciel nous observe (Heaven is watching us). Twelfth-century celestial planispheres from the Theory of the Planets by Gerard of Cremona serve as pedestals for views of a comet, of high symbolic importance since associated with the space probe Rosetta, in orbit since 2014 around 67 P Churyumov-gerasimenko, to observe it and collect data on the genesis of the solar system. In a space-time precipitate, De Sphaera Mundi telescopes ancient cartography and the latest space technology, medieval astrology and twenty-first-century space adventure. The Rosetta mission projects into the future the memory of humanity’s past, by embarking an unalterable disk on which are archived 1,500 terrestrial languages, like a new Rosetta stone allowing in the infinity of time, to decipher the languages of past civilizations. 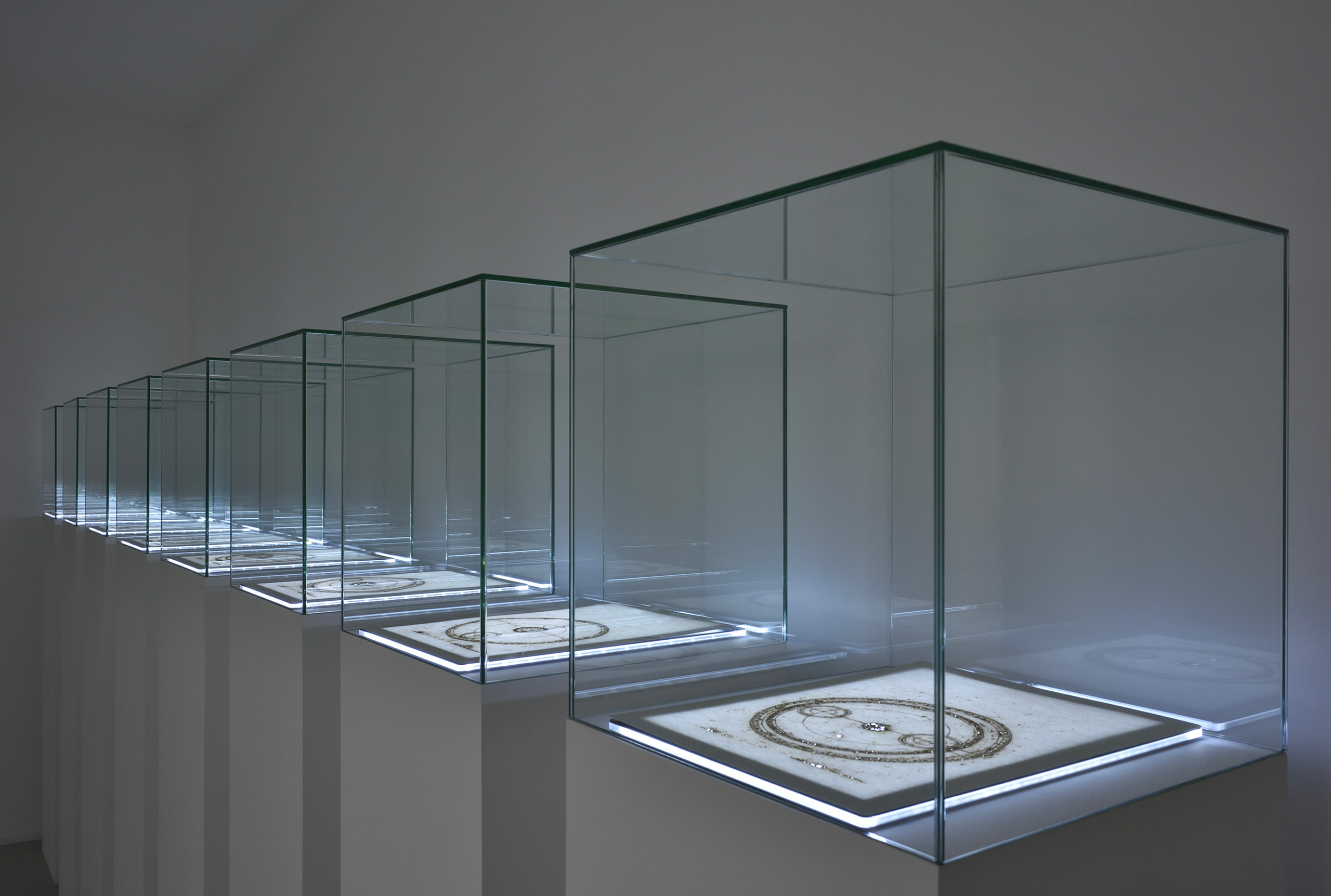 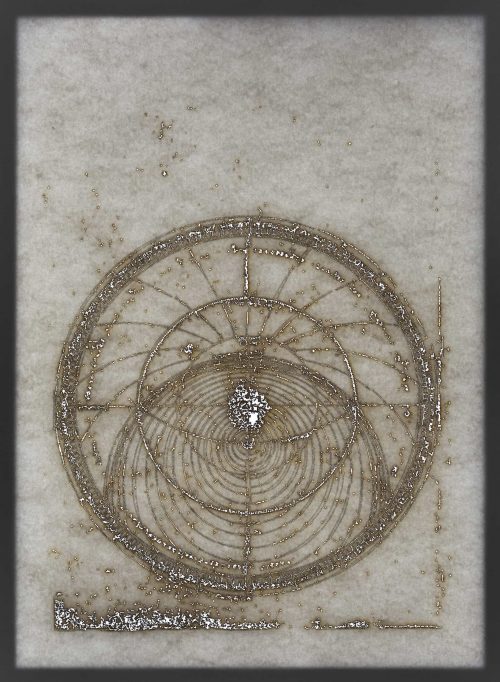 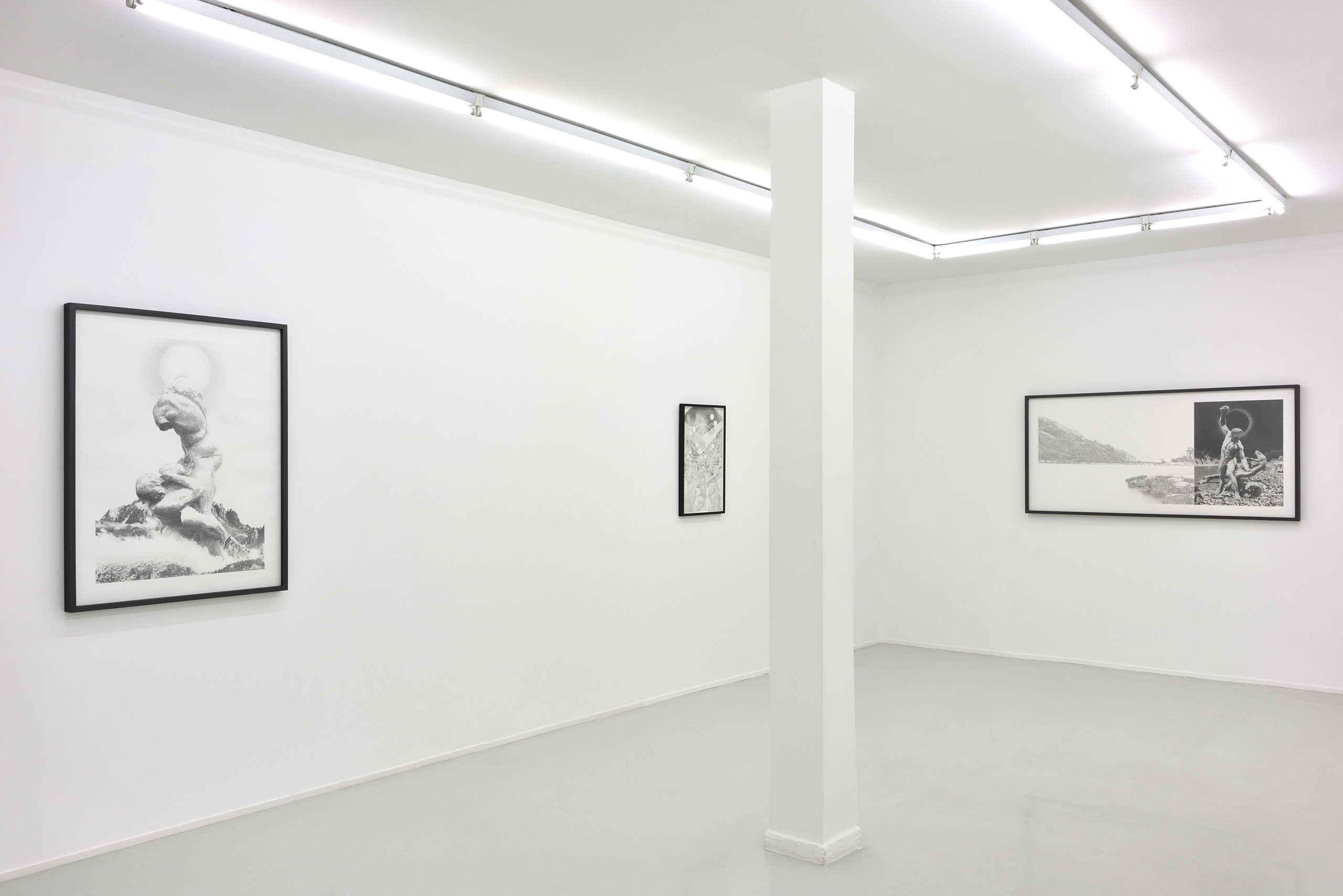 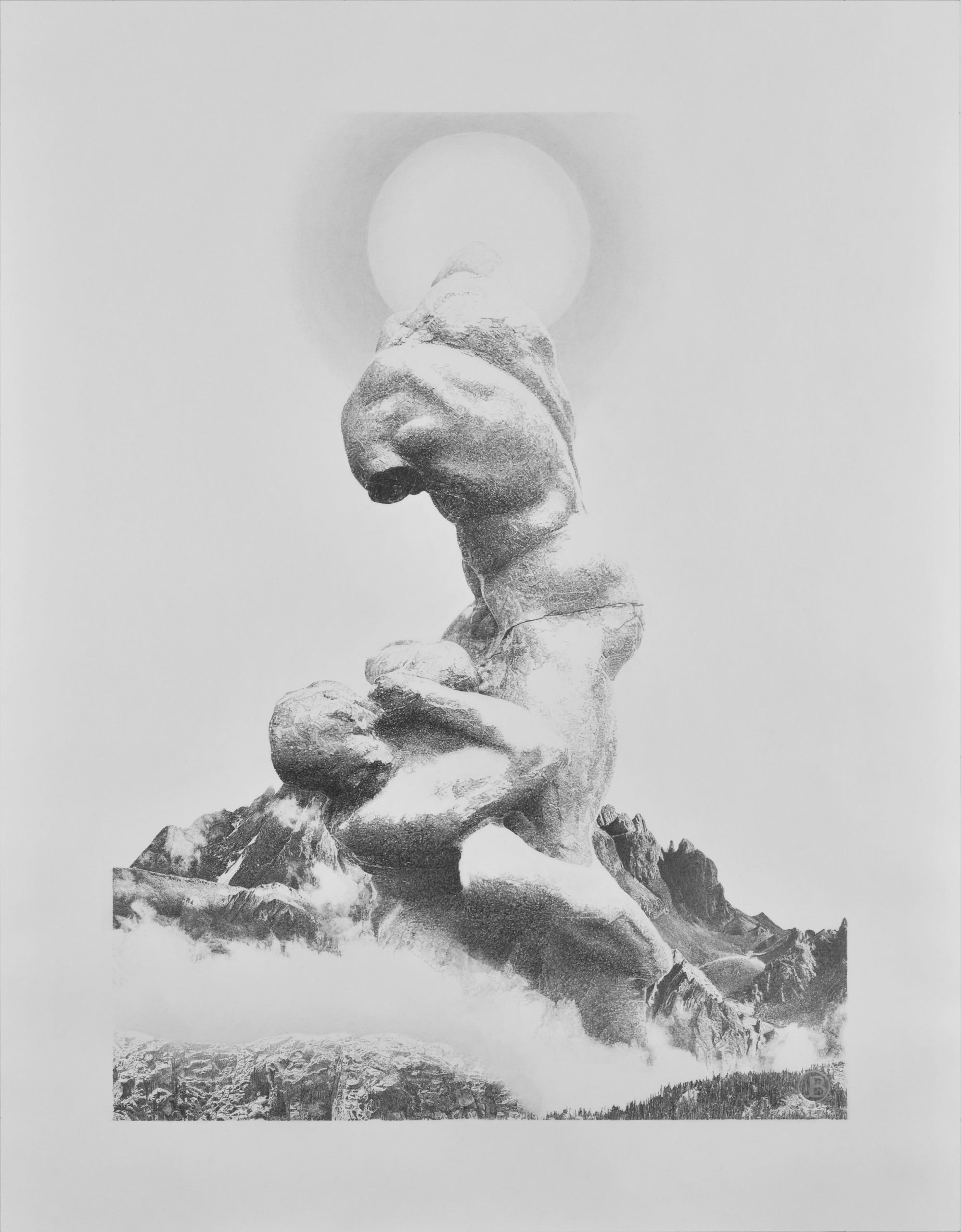 In this drawing made after a Michangelo Buonarroti sculpture, Hercules holds the giant on the ground in a deadly embrace; the years have deprived the hero of his physical integrity and his weapon, without erasing the impression of power and strength consubstantial to the myth. 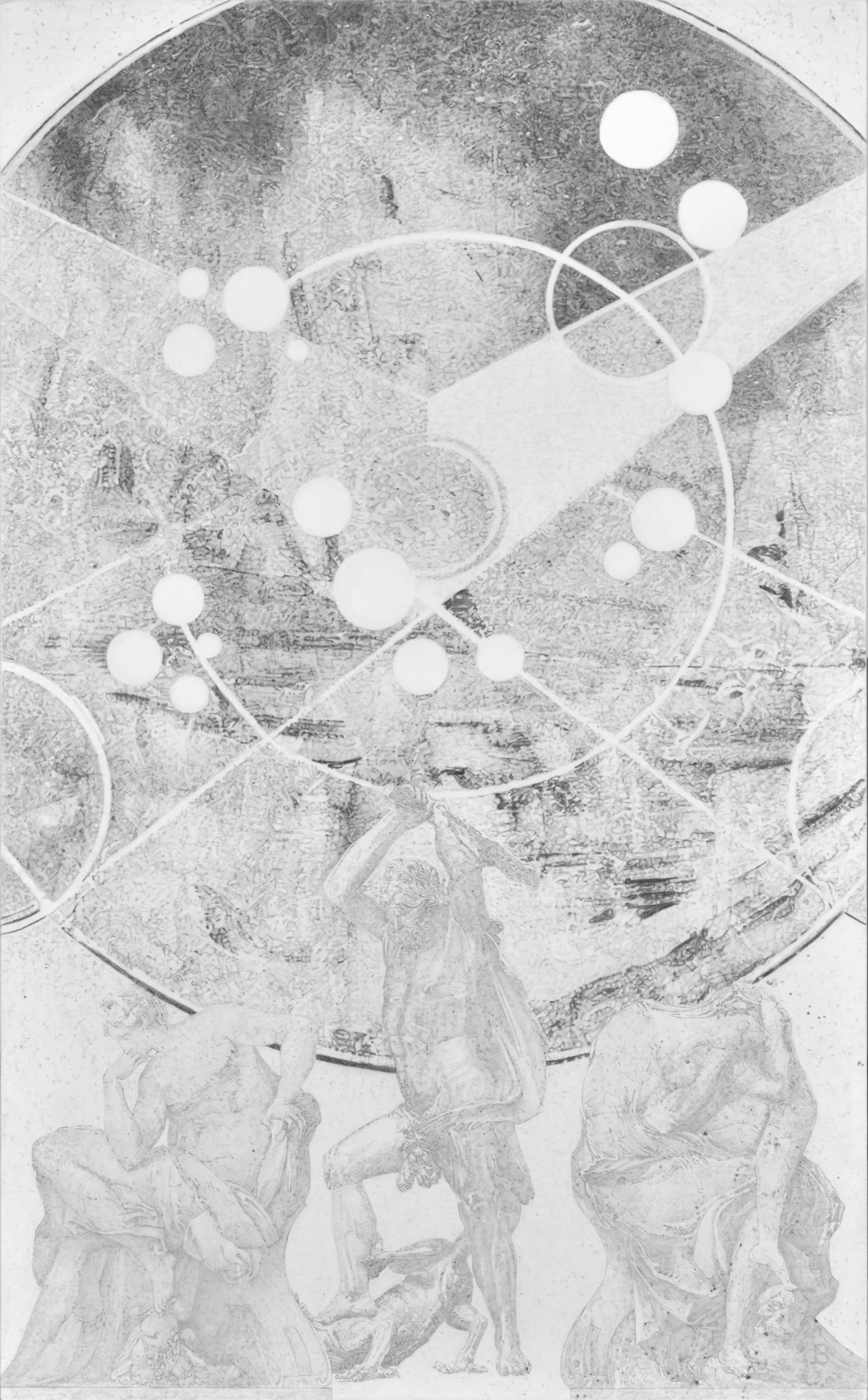 Cosmology and mythology are closely intertwined in this figurative and metaphorical representation of Hercules’ fight against the dragon guarding the golden apples of the Garden of the Hesperides. Overlooking the scene of the fight, an ancient map of the sky shows the constellation of the dragon. Like a flight of bubbles, a serpentine play of spherical forms is carried away in the movement of the immense wheel of the terrestrial globe, held up like caryatids by the Hesperides, daughters of the giant Atlas and first guardians of the apples.

The drawing, inspired by a panorama, represents a river landscape, a dark forest contrasting with a lighter horizon line closed by a bridge and a castle. The theme of the river reappears metaphorically in the evocation of a mythological episode opposing Hercules to Achelous, a river god capable of metamorphizing into various creatures, such as a huge snake, vanquished by Hercules. As in the previous triptych, set in a chaotic and dark landscape, a black star crowns the demi-god, captured in full warlike fury. 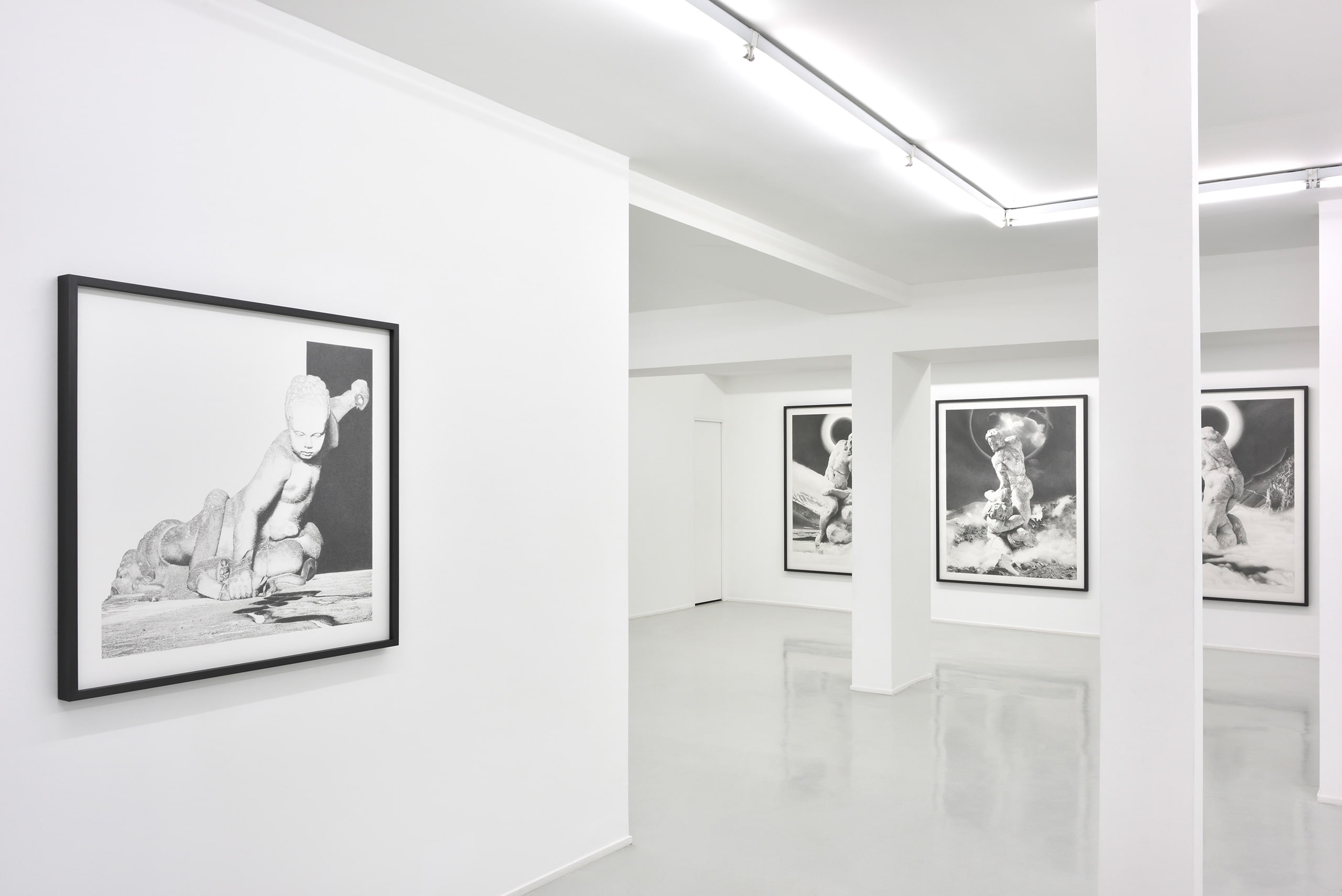 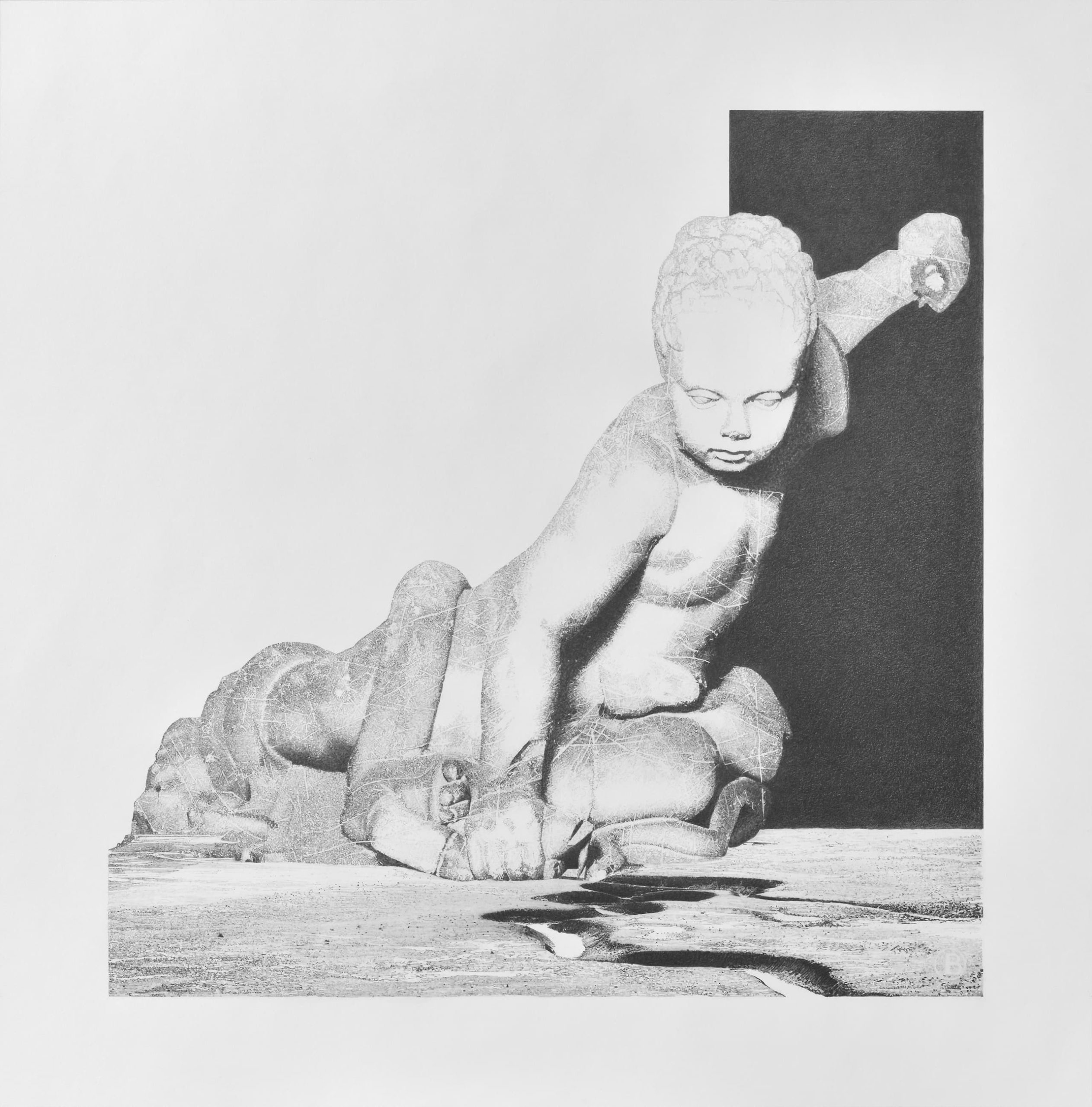 The series of depictions of Hercules’ battles concludes with his first feat, accomplished in the cradle when he was only a small child: strangling with his bare hands two enormous, horrible snakes sent by the goddess Hera. The decor is extremely bare, a black, sinuous trace on the ground bearing the imprint of the mortal threat that Hercules’ physical strength enabled him to thwart. 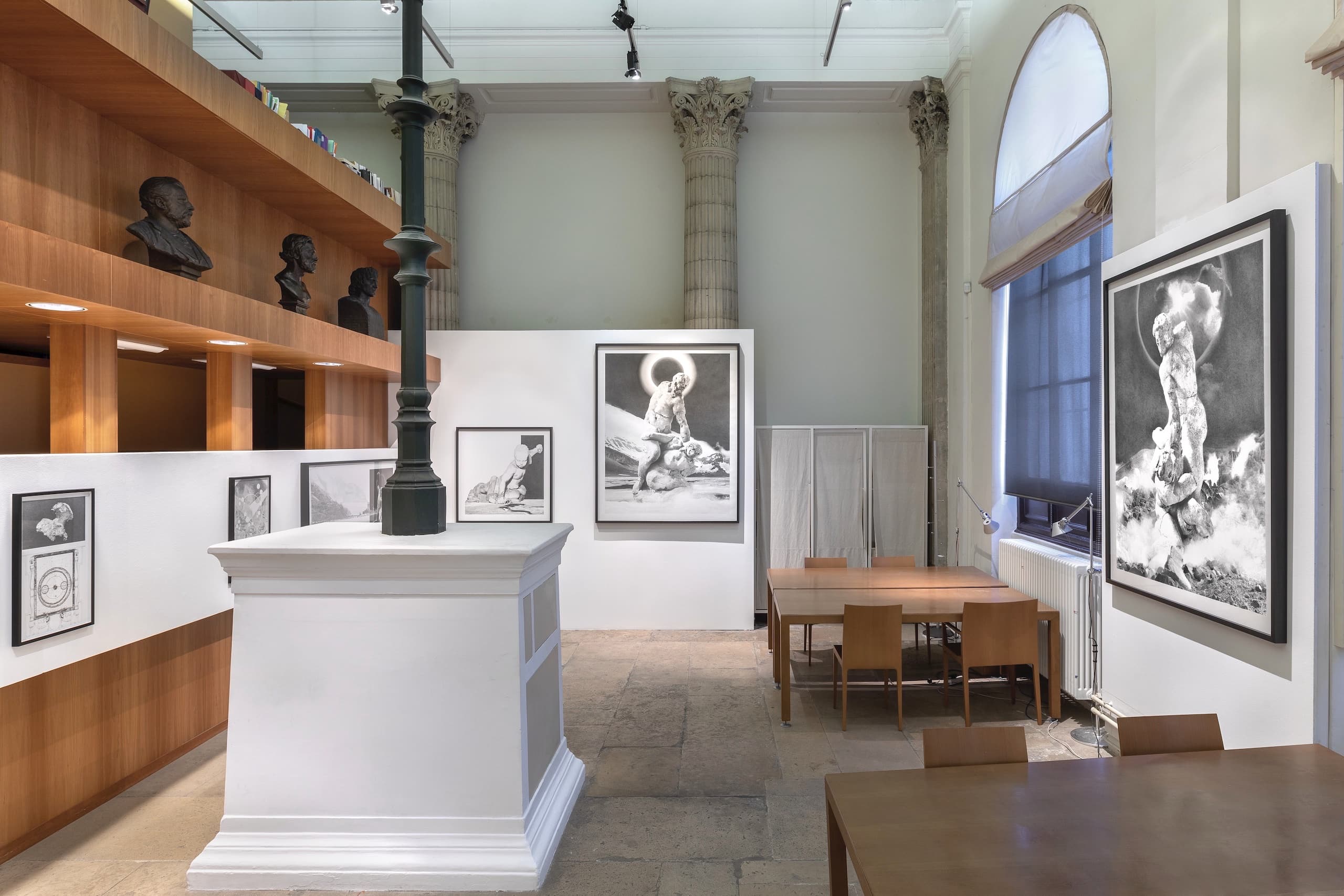